There was a considerable drop in temperature from Delhi as we deboarded at Kathgodam station early in the morning. Our mini-bus was waiting to take us to Wan where we were supposed to start our trek the next day. After a full night on the train and almost a full day in a tempo van, we reached our guest houses at Wan in the evening.The views changed significantly for the better compared to Delhi. We had travelled through the winding mountain roads and waited 8 hours for our destination to arrive. As we moved to higher altitudes, the density of civilization reduced, the view became clearer and the air sweeter. 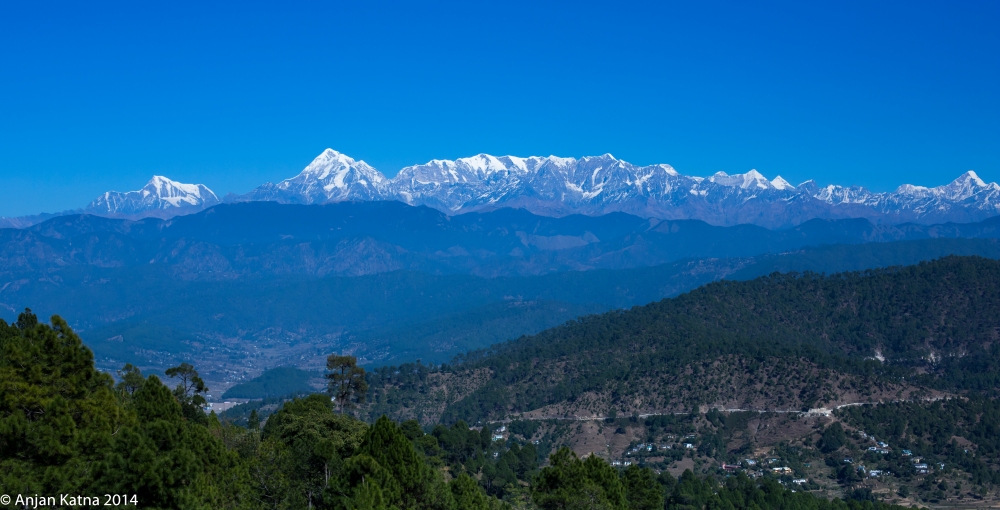 The view of the entire range from Kasaul

We were too tired for even the small trek to our district guest house that evening. It was hardly a ten minute stretch but most of us took almost half an hour to reach the guest house. A few simply ran upwards with luggage on their shoulders. “Damn!”We thought to ourselves, we need to buck up! After a good hot water bath, tasty food and a good night’s sleep, we woke up next morning to get ready for the trek to Bedni Bugyal. The morning greeted us with a good warm sun but we were advised to wear our sweaters which could be taken off later as it would get warmer by the afternoon. Our guide informed us that the first day’s trek would take us to a place called Gairoli Patal and that we would camp there that night. The next day we were supposed to trek up higher – to Bedni and Ali Bugyals. Wan is situated at an altitude of 2436 meters and Bedni at 3350 metres.

After a hearty breakfast, we started our trek with some water bottles, tid-bits to eat on the way and of course our cameras.  A few were carrying their whole luggage on their shoulders, while the rest of us promised to work hard on our fitness once we returned to Delhi. A false promise that we made to ourselves! Our luggage, meanwhile, was being carried by mules.

The start of the trek wasn’t too tough and our bodies were warmed up within an hour. We met many herders on our way with goats and cows. As we moved forward, we met local children who greeted us with a smiling ‘namaste’ with the hope of getting toffees or chocolates in return. The photography enthusiasts in our group made use of this opportunity to capture their innocent faces. As we moved, our stock of toffees diminished and so did the interest of the children in getting pictures taken. While crossing a small bridge, we saw a stream flowing below it and all of us ran towards it keeping our belongings on the side. The water was too cold to even be stepped in. Some of us took pictures, some moved forward and some sat on the stones, touched the water and felt calmness in the music of the flowing water. 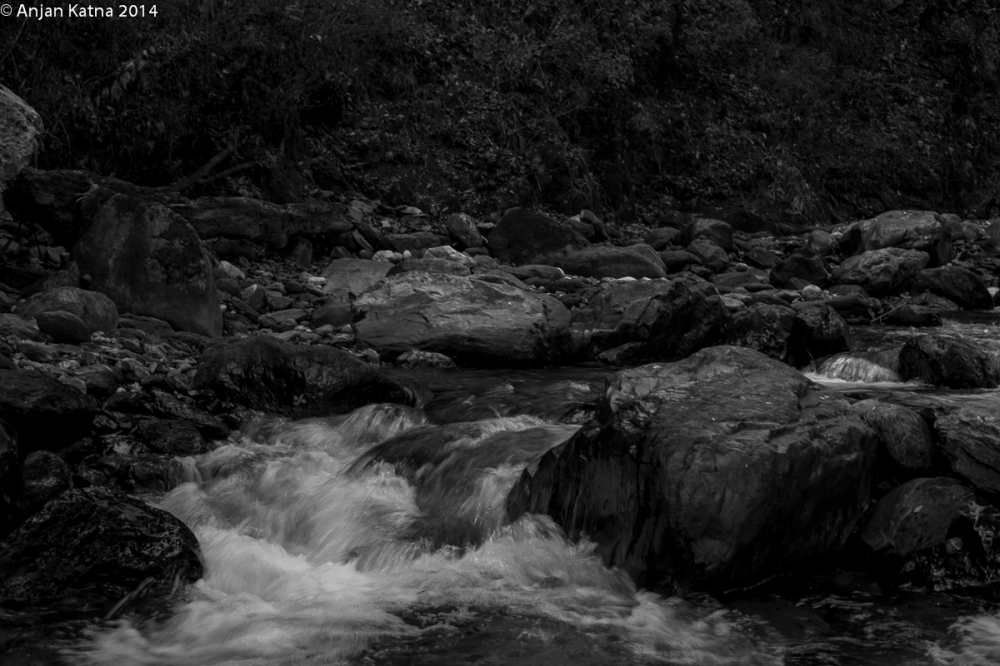 The small stream on the way from Wan to Gairoli Patal

It was a good break for all of us. After a steady hike of about 3 hours, our hungry group reached the destination for the day – Gairoli Patal – also to be our base camp for the night. After we had food in our system, we spent time looking around the camp. Our camp comprised of permanent fibreglass structures and the place was surrounded by mountains on all sides. We were of course in the lap of nature but this seemed like being in the lap of the mountains, literally! The mighty Trishuli peak was prominently visible in the background. Apparently, many have tried scaling the peak but a majority of the attempts have been unsuccessful so far. We sat outside as we waited for dinner to be prepared and engrossed ourselves in the beauty of the mountains surrounding us. We had an early dinner, earlier than our schedules in Delhi. We were exhausted and decided to call it a day.

The camping site at Gairoli Patal

After trying various permutations and combinations to fit eight people in one tent, we all found our places and slipped into our sleeping bags and slept away in the freezing night. As the night proceeded, it started becoming extremely cold.

The Trishuli Peak just after sunset

The next morning, as we all talked, we realized that none of us had slept well because of the cold. The guide told us that Bedni is even higher and much colder and suggested that we come back that night instead of camping there. We all agreed in unison. We left our luggage, carried important things and left for the bugyals. The trek from Gairoli Patal to Bedni Bugyal was tougher than the first day’s trek. Incidentally, this is the steepest part of the Roopkund trek as well.As we moved up, we could see a carpet of golden grass stretching far into the horizon. The winds were so strong that it seemed as if they were conspiring to throw us off the mountains but we were determined and kept moving forward to keep our bodies warm. We reached Ali Bugyal on our way, praised the mystic location and after resting a bit, moved forward (and upward) towards the high mountains. 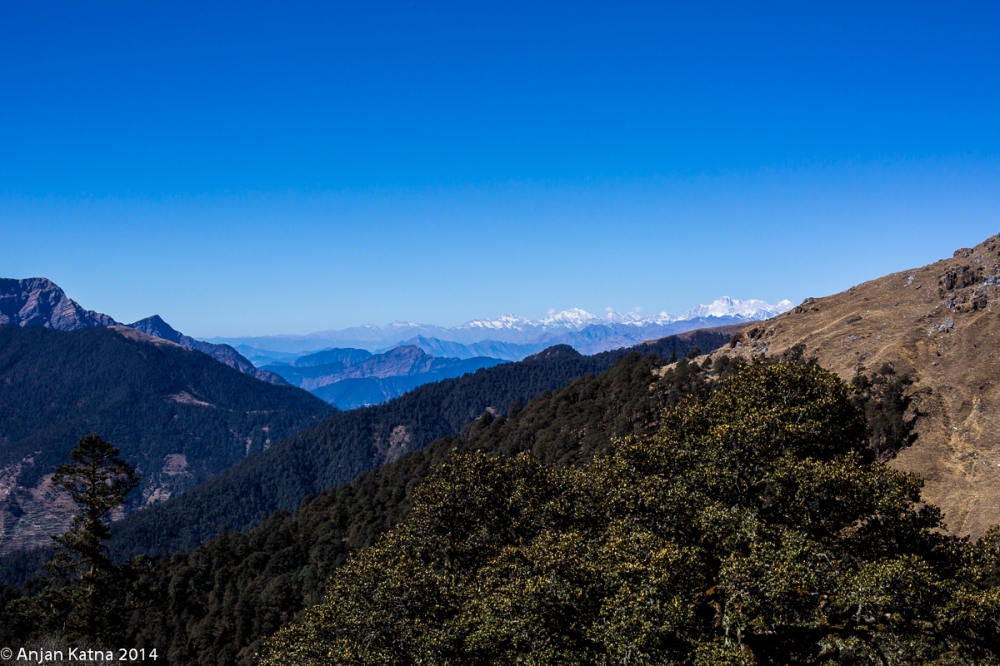 View from the Ali Bugyal

Another view during the trek

We reached the camping site of Bedni Bugyal and were rewarded with food. After our hunger was satisfied, we decided to stay there for some time before starting back for Gairoli Patal. The mighty Trishuli peak seemed nearer from there – the snow clad peaks in a cluster of three. Here, we noticed that unlike our base camp, the camps here were on top of a hill and surrounded by nothing but open grasslands on all sides. Low temperatures coupled with strong winds would definitely have made camping at night impossible. All of us felt that the suggestion to head back for the night was indeed a good one.

We captured the breath-taking scenery on our cameras and in our memories (and then it was selfie time for the non self-conscious ones!). We lay down for a few moments in the grass and were captivated by the sheer brilliance of nature. The place, although cold, was very different from what we had ever seen before. It was a pure visual text book definition of a meadow. We wondered that if this was the view in the brown winter grass, what beauty it would be in the summer months, when the grass was lush green. We made a mental note to visit these meadows in summer as well. Some of us were already contemplating the Roopkund trek again and were told it was closed during that season.

The camping site at Bedni Bugyal

With heavy hearts and numb hands we started our journey back. As we reached our base camp, we were provided with tea and snacks by our tirelessly working guides. Food never tasted so good, especially after the tiresome hike and the steep descent to the base camp.As the night proceeded and the bonfire was set, we had our soup and dinner. After dinner, we were joined by our cooks, the guide and porters. We requested them to sing us some local songs. Although the dialect was similar to Hindi,the only thing that we could make out was that the songs were about liquor, family and Gods. This connection we didn’t understand, but we sang and danced with them.

The winds were getting stronger and we could see light strands of clouds. With the temperature dipping further, we decided to head inside our sleeping bags.Come the morning and it was our last day at the base camp. We roamed around a little more and started back for Wan at 11. We crossed the stream again, spent some time there, bid it goodbye and continued on our journey. This part of the trek, i.e. from Gairoli Patal to Wan and back is a mix of climbs and descents.We reached Wan by evening and headed to Lohargunj (our last night of the trip) via jeep. As we reached Lohargunj, we didn’t feel like sleeping in beds. Just two days in the meadows and civilisation seemed a little alien to us. We wondered how Delhi was going to feel. We explored the mini town of Lohargunj in the evening and made jokes about the trip and the silly things we had done, and had one last look at the majestic snow clad peaks.

That night, most of us dreamt of Bedni and Ali Bugyals and knew the impact they had made on us in just two days. The next day we said our goodbyes to our ‘pahadi’ companions. As we boarded our van to start the journey towards Kathgodam, we looked around to feel and imbibe what was there. As we returned, we started feeling the bustle and pressure of the so called civilized world.

How to get there:

Wan is at a distance of about 400 km from Kathgodam and the road journey takes about 8-9 hours. Kathgodam is easily accessible from New Delhi by road/rail. The trek starts from Wan.

Pragya is an economist who works in the development sector. Her interests are singing, writing and travelling. She writes fiction, poetry and travel blogs. She is currently based out of Delhi. To read more of her writing, you may check: http://pragjn.blogspot.in/

Anjan is a PhD student in ATREE and is planning to work on the movement ecology of small carnivores and land use change. Previously, he has worked in the climate change and sustainability sector. He likes travelling and photographing various aspects of nature and the environment. To read more of his writing, you may check: https://mywildlifevisuals.wordpress.com/